Marigold days is behind us and the air is getting more crisp. Soon we will be getting our skis sharpened the sledge's oil changed and looking for our winter clothing. Before those dates, the city is busy finishing up some of the summers projects like the street work on 7th street. The city is also busy looking at our budget for 2015.

Follow up from last weeks article:
In my attempt to thank many of those involved with our Marigold days events. I missed a very significant contribution! I thanked the K-M Lions Club for their help with the setting the flags but I neglected to thank the entire Mantorville Field of Flags Committee. I am deeply sorry for this omission and I truly do appreciate both Cindy Nelson and Dick Denny's help organizing the event, collecting money and arranging the program. I would also like to thank the Kasson American Legion for their help with presenting the colors.

Mantorville GEM
An abbreviated version of my Article from last week appeared in the paper, for a complete copy refer to my blog at http://mayorbradford.blogspot.com. In the full version of my article I recognized our GEM for 2014 Mr. Anthony Hofstad. Mr. Hofstad also presented his Eagle project during the weekend. Congratulations again Anthony. My remarks at the Eagle Project dedication are also on my blog.

Projects
The Council is currently looking at our list of next projects; these include new siding for the Fire Department, sidewalk work and more street work. We also have the much talked about Waste Water Treatment plant project in cooperation with Kasson. There is more detail on some of these projects on my blog. The council also looked at expanding the scope of the 7th street drainage project. After our engineering firm consulted with three contractors, we received a very favorable bid for the expanded work to address additional drainage capacity around 6th street. The council gave our engineer the authorization to move forward with that additional work.

Remembering:
This last week we remembered the events of September 11th 2001. For many of us those events seem like just yesterday, for others it is something they heard about from their parents or teachers. In any event it is important to remember that there is evil in the world and that we must remain ever vigilant. The city's new flags, and many others around the nation, were flown at half mast to remember and honor those that lost their life that fall morning. We must also remember that many others have placed themselves in harms way and even made the ultimate sacrifice while defending freedom. May God bless all those that have served or are currently serving in our armed forces. We will NEVER forget! 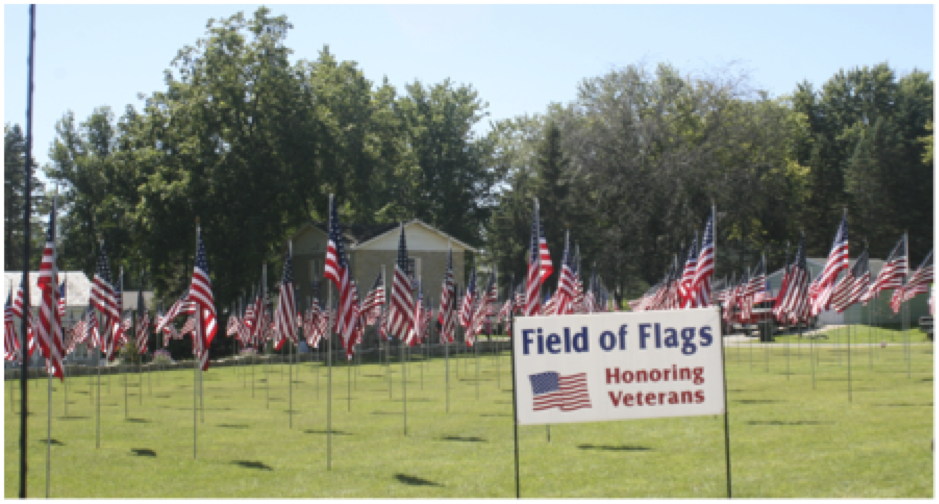 We had a perfect day, nice weather and a great turn out for our 49th Marigold days celebration. The weekend started on Thursday with a Field of Flags Honoring Veterans being setup by the Kasson Mantorville Lions. The Lions accepted nominations for the names of soldiers to honor on this filed and each flag placed represents a soldier that deserves our honor and gratitude. Thank you to all the Lions that helped set up this amazing display. I wanted to extend a thank you to all of our volunteers and vendors that worked so hard to make this years celebration another great success. I also want to thank everyone that shared part of their weekend with us. Plans already have started for our 50th Marigold days celebration so make sure to mark your calendar for next years event. The car show on Sunday was a great event as well. Thank you to everyone that took so much time to shine up their cars, thank you to the vendors that supplied the prizes and financial support for the car show and thank you to everyone that worked so hard to make this a special part of our weekend. The Marigold celebration culminated in the Grand Parade on Sunday afternoon. Once again the parade was well organized and expertly executed. Thank you, to everyone that made this so a successful parade. I can hardly wait until next years Quinquagenary celebration.


Our 2014 Mantorville Gem:
This year we recognized a young man from Mantorville who is truly an inspiration to all of us. Anthony Hofstad dedicated his Eagle project to the City of Mantorville on Saturday morning. For his Eagle Scout project Anthony designed and built a three pole flag display. His project has an American flag, Minnesota flag, Fire Department flag and a POW/MIA flag. In the picture to the right, Anthony wearing his Boy Scout uniform is standing with his family in front of his completed projects with the new flags on display. Senator Dave Senjem presented Anthony with an American flag that was flown over our state’s capitol. Anthony is also a member of the Fire Department Explorers program, runs his own small business and is already an active member of our community. While Anthony didn’t know about the GEM award until Saturday night, the Economic Development Authority had already selected him as the 2014 GEM of Mantorville. While his accomplishments would be impressive for any volunteer in our community, combine that with a series of significant personal challenges and considering he is only sixteen years of age makes his accomplishment all that much more impressive. When faced with challenges that most of us would have said, “This is too much I’m going to cancel some projects”. Anthony’s attitude was to push through and continue forward. Congratulations again Anthony! Now, the hard part will be “what’s next”. Start thinking about nominees for our Quinquagenary celebration next year.


Projects:
The Mantorville City Council met this past Monday to discuss the progress and future plans for the North West Drainage projects on 6th and 7th street. Keeps an eye out on the paper, more information will be shared soon with updates from the council as they work with our engineer.
The Council is currently looking at next projects; these include new siding for the Fire Department, sidewalk work and more street work. We also have the much talked about Waste Water Treatment plant project and the cooperation with Kasson.

I had the honor to make a few remarks at a Eagle Scout Dedication this past weekend as part of Marigold days. Senator Senjem presented a U.S. Flag that was flown over the State Capitol. I wanted to share with everyone that was not able to attend the ceremony some of the remarks I made about this brave young man:

The Boy Scouts of America is an organization with over 2.5 million scouts and close to a million volunteers. The mission of the BSA is to instill a sense of morality, reverence and duty in young scouts to prepare them for being active citizens. In most cases the Eagle Project is their first experience in community service. In Anthony’s case this is not true, Anthony has been involved in his community already and is currently serving as a Fire Department Explorer. Anthony is a true entrepreneur and has started his own small business. While the past year has been a difficult one for this young man with some significant road blocks a person of his age should not have to deal with, Anthony in the best sense of the scouts did not let this slow him down! He finished his Eagle Scout project, continued with his duties on the Fire Department and kept up with his school work. Quite impressive for anyone at any age!

The Scout Law says:
“On my honor I will do my best to do my duty to God and country”…… I’m going to stop there. Duty to God and Country! There is something you don’t hear too much about anymore these days. The concept that a good citizen has an obligation to help his country, neighbors and to respect God’s law.

I feel that Anthony is a perfect example of what the scouts had in mind when they created the rank of Eagle Scout.

The City of Mantorville is proud to call Anthony one of our own, and his example serves as a reminder to us all.

We are here to dedicate Anthony’s Eagle Scout project to the City of Mantorville. The Eagle project is only pursued by 7% of the BSA’s 2.5 million scouts, making this a very prestigious achievement. In order to reach this rank a scout must complete the requirements of the previous five ranks, earn 21 merit badges which include First Aid, Emergency preparedness and Family and Community responsibility. In addition the scout must serve in a leadership position in the scouts as well as in a religious organization.

Now is with great pride and joy that I introduce our senator, Senator Dave Senjem to say a few words about Anthony’s accomplishments. Dave…

Posted by Mayor Bradford at 8:43 PM No comments:

This year we had one of our best turn out for the National Night out. The Fire Department provided a tanker truck again to spray the kids with water. The Red Cross was available to answer questions. The Sheriff and Fire Chief were both present as well as many of the City Council. I wanted to post some of the great pictures from the event on this blog. I hope you enjoy them and feel free to leave a comment. 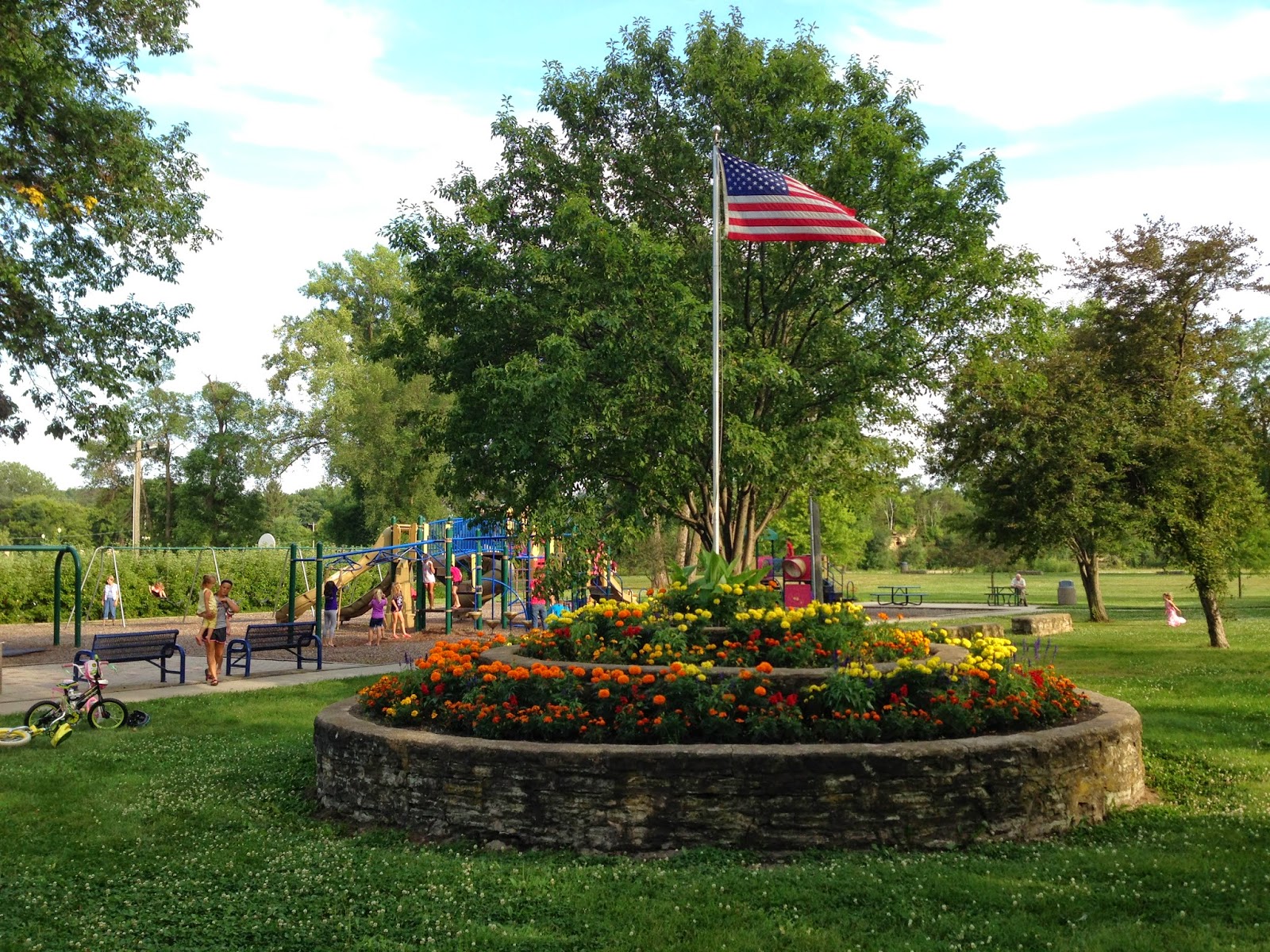 The kids kept cool and had fun thanks to the Mantorville Fire Department. 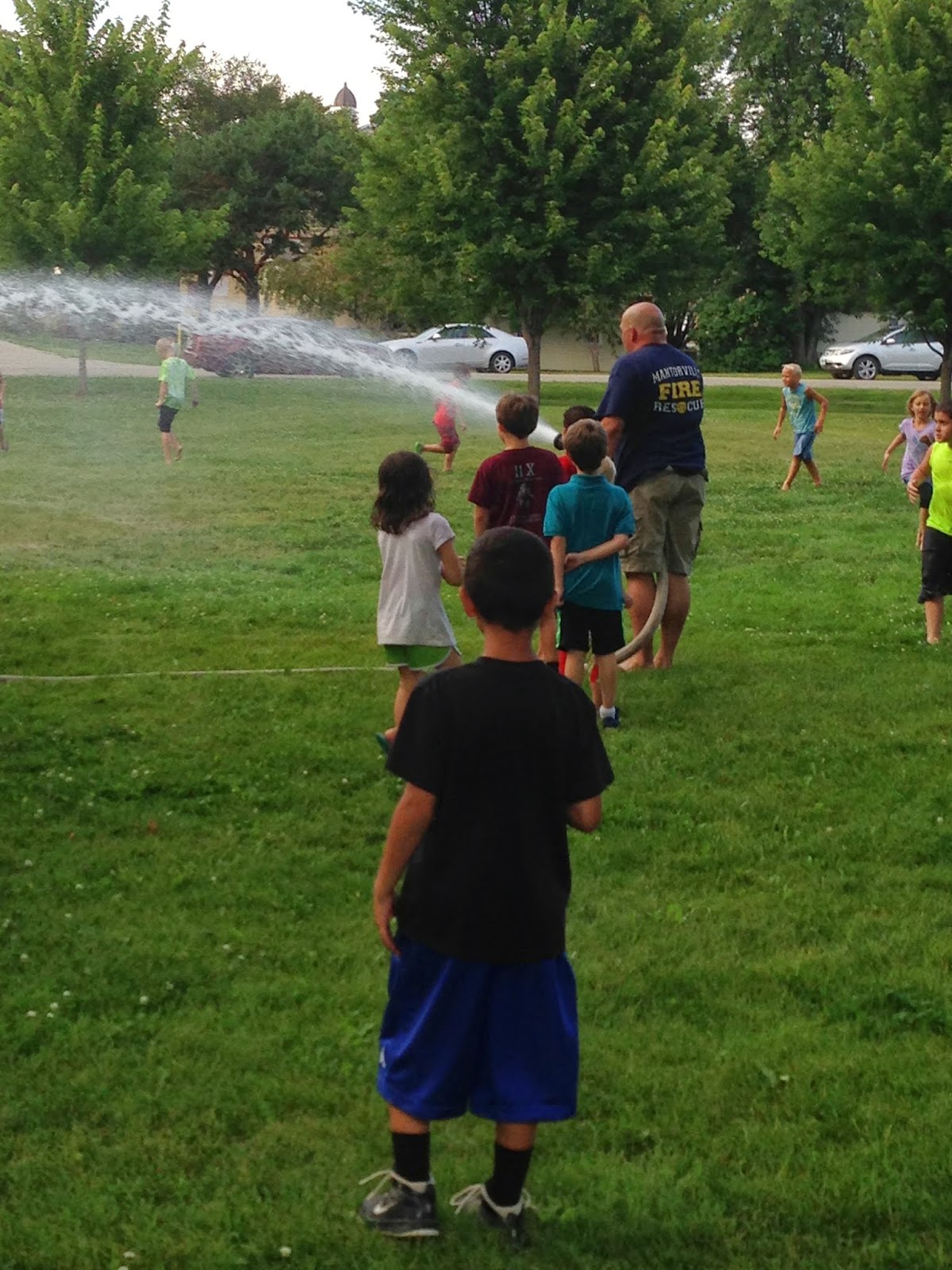 The Fire Department provided the water, equipment and water to keep the fun going. 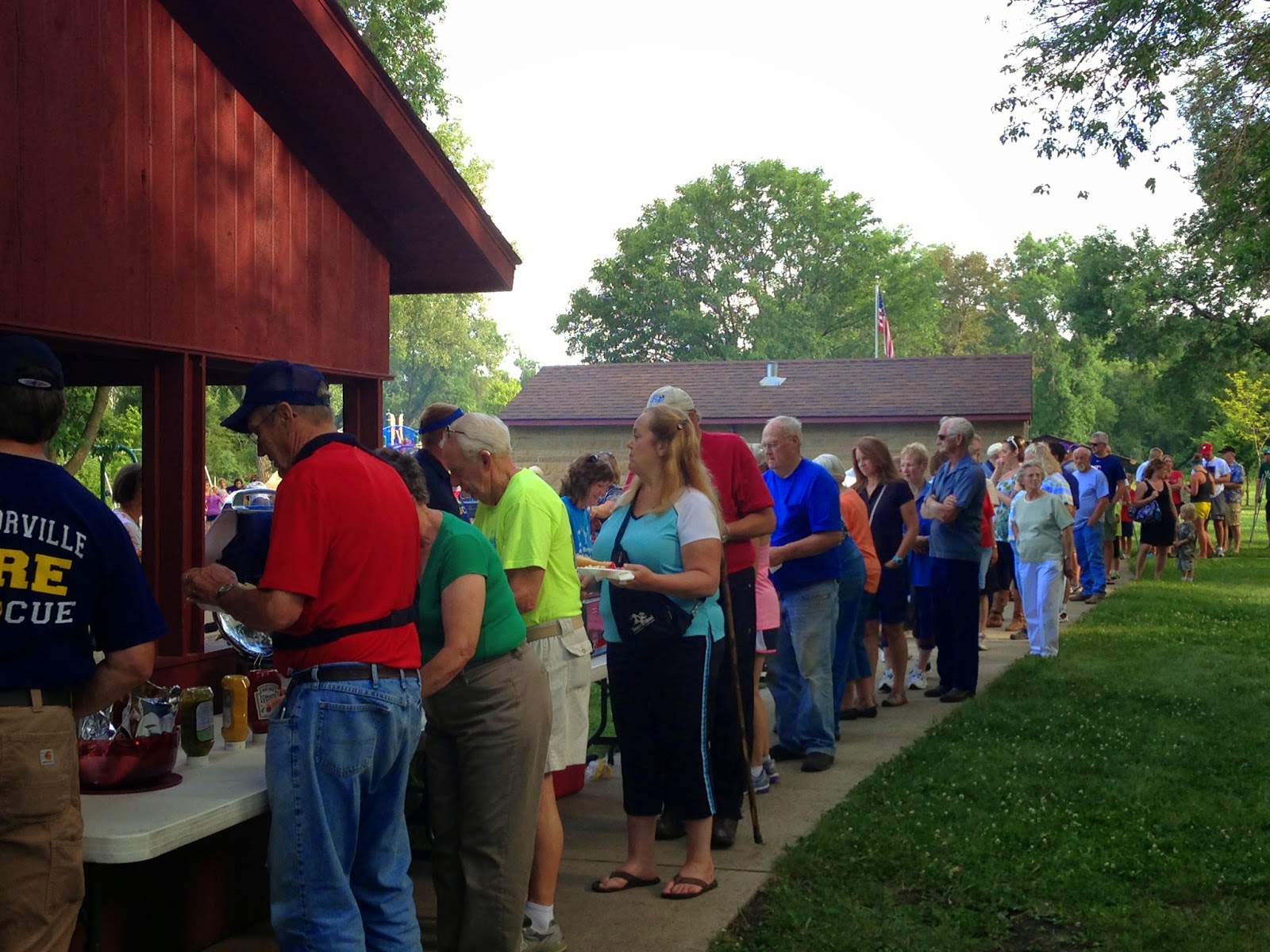 No one seemed to mind the long line, since there were many things to talk about with our neighbors.
Posted by Mayor Bradford at 7:48 PM No comments: