The MRA along with Jane and John Olive arranged a thank you lunch for all the workers that have been in town since June to restore the wall next the hwy 57 around our court house. All during this summer workers from EAI worked labeling, photographing and reassembling the historic limestone retaining wall next to the court house. The crew plans on wrapping up this week or early next and the MRA really wanted to show the communities appropriation and provided a lunch for the crew as they finished up.
Posted by Mayor Bradford at 11:43 AM No comments:

September 27, 2016
Flooding:
The flooding event last week resulted in having the Riverside Park evacuated around midnight. The Zumbro Bend Rendezvous’ annual event was canceled due to flooding conditions in the park. It was unfortunate that we had to evacuate this event, but the safety of the participants was more important. Hopefully next year the weather will cooperate.

During the heavy rains and winds of last week there were some damage areas that the city is aware of. Please report any storm related damage you are aware of to the City Hall such as down trees or eroded streets.

I was able to examine the water level in the park at the high water mark and I have some pictures on my blog for anyone that would like to see just high the water came into the park. My blog is located at: MantorvilleMayor@Gmail.Com

Court House:
Council member Hofstad and I were able to attend the open house for the newly remodeled Dodge County Courthouse. Judge Williamson did a great job of organizing the event and arranging several dignitaries to attend including one Minnesota Supreme Court Justice. After the formal remarks there was an opportunity to tour the secure areas of the courthouse. We were able to see the new 9-1-1 dispatch area and learned about the new feature where in the near future the Dodge County Dispatch will have the ability to accept text and video over the 9-1-1 network. Dodge County will be one of the first in the state to have this capability.The new layout of the courtroom is based on a drawing found inside the old walls and is believed to be the original layout from the 1800s. The redesign also has a safer secure corridor for the transport of prisoners.

The City of Mantorville would like to congratulate the County on a successful remodel of this historic structure and a continued healthy working relationship with the City. We are looking forward to another 100 years of service from the states oldest continually working courthouse. I have placed a copy of the text for the ad the city placed in the paper last week plus some additional pictures of the our tour of the court house on my blog at : MantorvilleMayor@Gmail.Com

Accessory structures:
The City Council passed the new changes to the accessory structure ordinance last Monday night and the last remaining tabled item is the definitions of the Transitional District. The new structure size was increased from 900 to 1400 square feet.

Still looking for one more EDA Commissioner:
If your interests are more aligned with promoting tourism and our business climate here in Mantorville the EDA does still have one position open. The City Council on Monday approved the appointment of one new commissioner that was forwarded from the EDA to the City Council and with the next appointment the Economic Development Authority will be at full strength. Please consider applying for this rewarding opportunity.

Waste Water Treatment Plant:
We found out this week that we were granted our permit for our new waste water treatment plant. The City Council will hold an emergency session this Friday to award the contyract.

Posted by Mayor Bradford at 8:47 AM No comments:

Heavy rains hit Mantorville and the surrounding area this past weekend. Along with a evacuation of River Side Park the city also monitored the RV camp site. The camp site was not evacuated and remained above the flood levels all weekend. I was able to document some of the waters encroachment at close to the high water mark and I wanted to share some of the photos I took of this event. 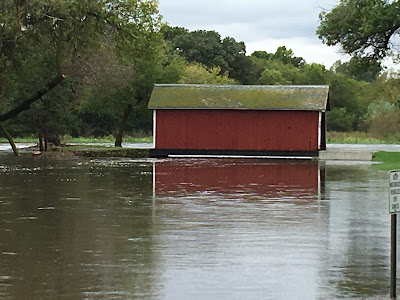 The Covered Bridge stayed above the water level

In the next photo we can see that the new benches that were added this summer to River Side Park were in the path of the flood waters; however, the water velocity was not great and the benches did survive the event. 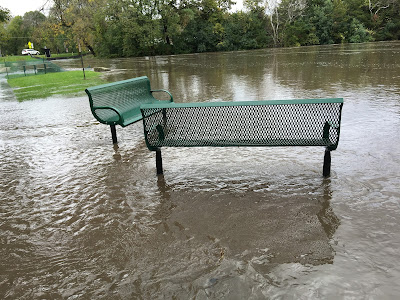 The new benches added this year were in the waters path

The flood waters greatly increased the water volume and velocity as it went over the Mantorville dam. In the photo below we see how the usually well pronounced dam's incline has been smoothed out and looks more like a bump in the waters flow. 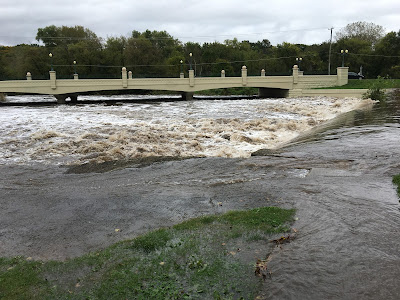 The final picture in this series show a panoramic view from the south side of the Covered Bridge and extensive encroachment of the flood waters into the surounding areas.

Panoramic view of the Flood waters around the Covered Bridge
Posted by Mayor Bradford at 8:44 AM No comments:

On September 16th the Dodge County Court House was open for an open house. Council member Hofstad and I were able to attend and represent The City of Mantorville. Judge Williamson held a special court session and waived the photo restriction for this event. 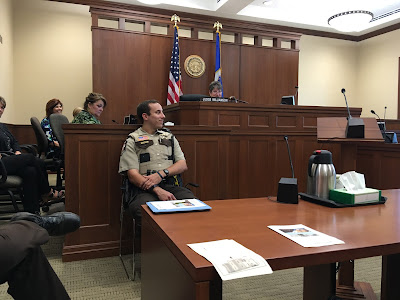 Photo 1: Judge Williamson Calls court to session
The new design and layout is based on the original 1800s layout and includes a rich walnut wood décor. In the next photo we can see the entire rooms layout. 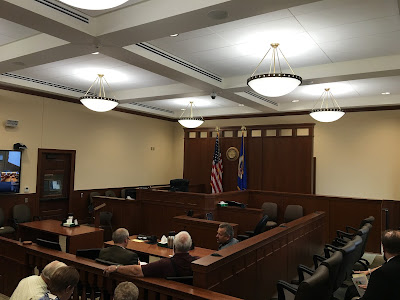 Picture 2: New Dodge County Court Room
Judge Williamson was able to get several visiting dignitaries including one current Minnesota Supreme Court Justice. In the second picture below we can see some of the visiting judges presenting a plaque commemorating the reopening of the oldest continually working courthouse in the State of Minnesota. 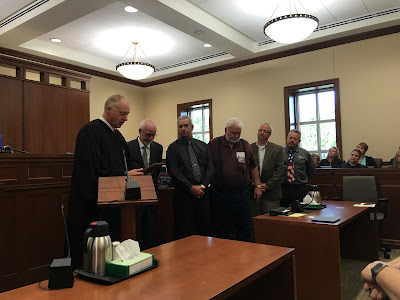 Picture 3: Presenting the plaque
Congratulations Dodge County on the successful completion of an extensive remodel and for your focus and dedication on preserving the historical significance of this local land mark. The City of Mantorville is looking forward to working with the Dodge County Court system for another 100 years.
Posted by Mayor Bradford at 8:27 AM No comments:

September 12, 2016
2016 Marigold Days:
The 51st Annual Marigold Days celebration was this last weekend and once again it was a huge success. I would like to thank everyone that worked on any of the events this past weekend. The Marigold Days Committee, the MRA, the Field of Flags committee, The Mantorville Fire Department, The VFW, The Congregational Church, The Car Show organizers, the live performers, the Fireworks, all of our many vendors and supporters and everyone else that made this weekend possible. With out your efforts this event would not happen so THANK YOU! I have uploaded a few snap shots I took during the weekend. The photos can be seen on my blog at MayorBradford.BlogSpot.com

Stage Coach Days:
The EDA is organizing a new subcommittee much like the one we have that organizes Marigold Days celebration. The kick off of the new committee will be held at the Hubble House on September 18th at 4:00 pm. There will be some hors d’oeuvres and beverages provided by the EDA. We are planning on having a person that has had a great deal of success in organizing and motivating volunteers to speak to the group about some possible approaches to make this group successful. This article is an open invitation to anyone that would be interested in helping with next years Stage Coach Days to come see what this might involve and get more information with helping out with a city function. I am really looking forward to seeing many new faces.

Still looking for one more EDA Commissioner:
If your interest are more aligned with promoting tourism and our business climate here in Mantorville the EDA does still have one position open. The City Council on Monday approved the appointment of one new commissioner that was forwarded from the EDA to the City Council and with the next appointment the Economic Development Authority will be at full strength. Please consider applying for this rewarding opportunity.

Thank you again for participating in this years Marigold Days weather you just came down to look or if your were involved with helping out.

Posted by Mayor Bradford at 8:16 AM No comments:

This Past weekend was the fiftieth anniversary of the Marigold Days Celebration. Each day from Thursday to Sunday had dozens of events each day with the busiest being Saturday. I wanted to share some snap shots I took over the weekend. 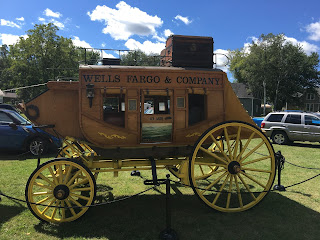 Young, old and everyone in between had a good time at the bean bag toss competition. 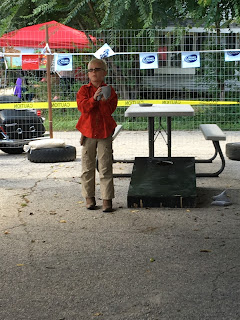 Four young ladies stepped up to be part of the Marigold Days Royalty. Each girl has made a commitment to make our community better and Miss Laura Soland was chosen to be this years Miss Marigold Days. Congratulations Laura. 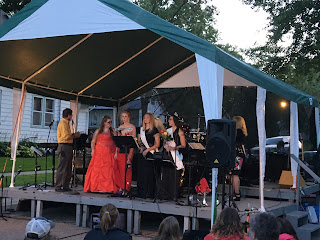 The crowning of Miss Marigold Days

There were some amazing vehicles on display this at our Car Show on Sunday. One particular GTO caught my eye. 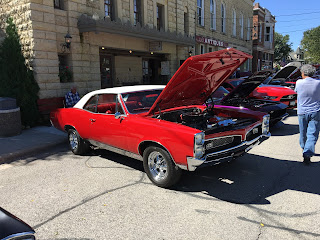 Pontiac GTO at the car show

Both the saloon and the Fire Department held dances at this years celebration. Both Friday and Saturday nights events were well attended and many took part in the later hours of the celebration with dancing and enjoying music. 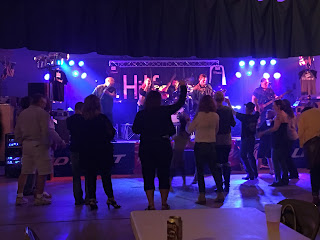 Hope to see everyone there next year
Posted by Mayor Bradford at 8:14 AM No comments:

The 50th Anniversary Marigold Days:
The 51st Annual (50th Anniversary) Marigold days celebration is this weekend (Sept 10 & 11). The celebration starts on Thursday at 1:00pm with the Restoration & Log House tours and winds up with “Smash and Grab” playing live music starting at 3:00pm. Through out the weekend there will be live music, a dance and several special events to attend. The full schedule of events for this years Marigold Days celebration can be found at: http://www.marigolddays.com/?page_id=74 This years event promises something of interest for everyone. I hope to see everyone down there for a great time and don't forget the fireworks display at 8:30 Saturday night.

Remember 9-11:
This weekend also is the anniversary of the barbaric acts by Islamic Terrorist against a peaceful Nation. Most of us still clearly remember the day that a group of cowardly terrorist brought evil to the city of New York. We also remember how we came together as a single nation and answered the acts of evil with resolve and determination. This weekend while we are celebrating one of the last warms days of summer, take time to reflect, give thanks and honor those that have served or are currently serving in our Armed Services. From myself, and everyone with the city let me offer a well deserved Thank You, and for those still serving may God watch over you and bring you home safe to your loved ones.

Reminders:
We have had one application for a new EDA member, but are still looking for one more commissioners. Those interested should come down to city hall to fill out an application.

The City Council will continue our discussion on Accessory structures, adding wording for B&B operations within Mantorville and changing some of the definitions within the Transitional districts. These discussions are a continuation from last City Council’s public forum.

Four of the five spots on the City Council are up for elections this year, please check your calendar to see if you will be in town on the first Tuesday of November and if not please make arrangements to vote absentee.

Remember that Marigold Days is this weekend; I hope to see everyone there.

Posted by Mayor Bradford at 9:57 PM No comments: