VANDALS
The City is investigating damage to City property that occurred the night of Saturday January 27. Two City signs and a bus stop were vandalized with spray paint. I have included of some of the  damage below and there was some that was too offensive to publish. 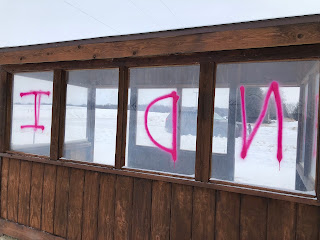 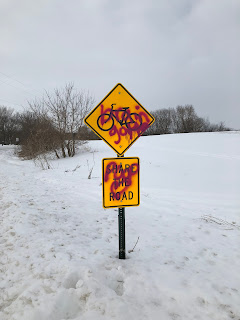 The Dodge County Sheriff's office is  collecting evidence and talking to witnesses. I am personally offering a reward of $500 for information leading to the arrest and conviction of those responsible. If those responsible would like to minimize the results from these actions, it is strongly recommended that they identify themselves to the City and work with staff to make repairs. The Dodge County Sheriff's office is investigating these criminal actions and will be following leads and witness reports soon. The City considers this vandalism a significant criminal action and will encourage the Sheriffs office to activity identify those responsible. Those with information regarding these events are encouraged to inform City Hall or contact the Dodge County Sheriff's office directly.

January 22, 2018
The City still has maintained it’s AA- Standard and Poor’s (“S&P”) rating for a fourth year in a row. During the last review a note of “no change expected” was noted and is a strong indicator that Mantorville is on solid fiscal grounds. The City is able to move forward with needed infrastructure projects and the City is currently planning for the future. The state of the City is strong, stable and very healthy.

Tax Levy Rate:
The City was able to once again reduce the tax rate.

You may notice in the above table that the levy amount for the City exceeded the amount from 2012 for the first time for the 2017 budget even though our tax rate had decreased. The reason for this is that the taxable values of properties within Mantorville increase around 9% in 2016 and 13% last year. If the council had allowed both of these increases due to property tax values increasing the tax levy would be over $525K for 2018. The council did not want to raise our tax levy amount by 13% (zero rate change) while the housing market is just starting to recover. The council did feel that the levy needed to increase over the 2012 dollar value in order to meet some of the construction needs during the next two years.

Waste Water Treatment:
The City was able to break ground on the long awaited Waste Water Treatment Plant in 2016 and was able to complete the project in 2017. With this project being completed and the City benefiting from some grant money as well as low interest loans for this project, the council is now able to start taking a more focused look at the much needed street projects. In November we received an official letter that notified the City of a grant for our project in the amount of $1.8M with an additional PFA loan amount of $469K at 1% interest. This is very good news for the citizens of Mantorville. I will post the entire letter to my mayors blog (MayorBradford.BlogSpot.com).

Water Over the Dam:
Maybe I should say water under the dam. The City was able to conduct some maintenance on our dam. Maintenance was preformed on the foot of the dam as well as the mechanism of the gate on the dam. In 2018, there may be some additional maintenance needed on the dam, I will keep everyone updated on this process.

Speaking of Water:
We conducted a visual inspection fo the water tower to determine needed maintenance items and to check on the operation of the overflow control mechanism. We are still working with AT&T on a timeline for the antena upgrade to better serve the citizens of Mantorville with cell service.

State Capitol Re-dedication:
The State Capitol was repaired, refurbished and re-dedicated in 2017. Many mayors from around the state including myself, represented our cities at the re-branding ceremonies.

City Branding Efforts
The EDA and the City have been working on a branding project since 2015. The final three designs for the new look and feel for the City were on display and businesses and citizens voted on their favorite designs. After public input the EDA choose a design and the EDA was able to finalize this work in 2017. Logo items can be purchased from various merchants around town. After Mantorville rolled out our new Brand, The Secretary of State, Steve Simon, came down to Mantorville and discuss our process as well as to solicit some feedback on our observations of working with the Secretary of State's office. The City will continue to move forward with these efforts on additional assets as they are needed.

Streets and Infrastructure:
The City was able to complete phase one of the fifth street project and plans are in place for the continued work on phase two of that project. The City is also revisiting its street inventory study with our City Engineer and City staff. The City council uses this survey to evaluate which streets are next in line for attention and needs funds budgeted. This spring/summer construction season looks to be a very busy one again for Mantorville and I will keep everyone updated via my blog and articles.

A Bright Future
The last year brought both challenges and opportunities. The Council was able to move forward with some much needed constriction projects and infrastructure needs while maintaining our S&P rating with sound fiscal policy. The City's effort over the past several years to secure grant and bonding funds for the WWTP project were rewarded and the project was completed. In 2017, the City saw an increase in constructions permits.The state of the City is sound and healthy and every indication is that Mantorville will have another healthy year in 2018.

Posted by Mayor Bradford at 1:22 PM No comments: